My piano is 28 years old today!

During my first year in New York, I had keys to four friends’ apartments.  They had pianos, but I did not.

That arrangement was certainly better than nothing, but unsatisfactory just the same.  When crunch times came, I needed more access to an instrument.

Besides, calling your friends to find out when they’re leaving becomes awkward after awhile.

By my second year, I had saved enough money to make the down payment on an upright piano.  Knowing that most piano makers offer installment plans, I decided to go for it.  It was the second week of December.

First stop:  Steinway & Sons on 57th St.  No way could I afford a grand, so I looked at uprights.  Even the new uprights were too expensive, so I looked at their “pre-owned” stock.

I fell in love with a “pre-owned” Steinway upright.  It was 10 years old and in perfect condition.  The sound was wonderful!

But the company wouldn’t sell it under any circumstances.  Not wanting to rent, and feeling extremely frustrated, I left the store and crossed the street to Baldwin.  🙂

There on the sales floor were 15 or so uprights, all for sale.  The price looked like something I could handle.  Almost every practice piano in graduate school had been a Baldwin, as were my friends’ pianos in New York.

I tried all 15!  What a trip!  That was equalled, or possibly surpassed, only by rehearsing with a singer for a competition in Steinway’s basement a year or two later.  Picture wall-to-wall grands nested together, all for sale.  At least 100.  Mind-boggling.

The Baldwin I liked most had the stiffest action and sounded like a Steinway.  In other words, the sound was less bright than most Baldwins I had played in the past.

A word about the choice of a stiff action

As a collaborative pianist, I constantly play rehearsals, auditions and concerts on unfamiliar pianos.  Horowitz travelled with his own piano, but that is unusual.  And for rehearsals, that would be ridiculous!

One of my teachers advocated practicing on a stiffer action that you would normally encounter.  That turns out to be extremely useful advice.  When you’re used to stiffer action, then nothing about a different action can throw you.  Adjusting down, or lighter, is easy.

Working harder in a performance, though, doesn’t cut it.  It robs your concentration, forcing you to focus on how you are playing rather than on the music.  (How am I going to get these keys to work?  What if the notes don’t sound?  There’s a big diminuendo ~ ack!)

All the Baldwins I’ve played in schools and churches have been there for years.  And my piano technician told me a story about Baldwins’ construction.

My technician has tuned hundreds of pianos in schools, most of them Baldwins.  One day, he arrived at a school, only to hear that the piano had been moved and something happened.  Have you been in situations where the piano moves from the chorus room to the auditorium and back, over and over?

This time, the middle school boys had been allowed to move the piano without supervision.  They went fast in the hallway because it’s fun, rounded a corner with the piano, and crash! The piano fell onto its back.

And nothing broke! Not the case, not the hammers, not the fall board, nothing.

Back to the store ~ I arranged a payment plan with the salesman and happily paid the down payment.  My choice ~ a Baldwin “Hamilton” full upright (Dwight Hamilton Baldwin founded the company).

When I arrived home, I called my father in the Midwest.  He was happy for me, as I knew he would be.  A day or so later, he called back.

“When is your piano being delivered?”

“A couple of days after Christmas.”

“Can’t they deliver it on Christmas Day?  Call them back.”

You see, in my hometown, Burlington, Iowa, the dealer would close the store on Christmas Eve, load the piano onto his truck, and deliver it in person.  And the piano would probably be wearing a big red bow. 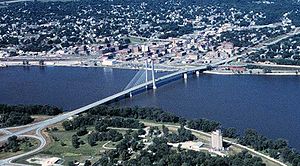 Burlington, Iowa on the left, Illinois on the right ~ Image via Wikipedia

My father paid the balance of the bill!  And I called him the moment it arrived, to play it over the phone for him.  He was delighted about that, but I think he remained disappointed that I didn’t have my piano on Christmas Day for the rest of his life.

My piano is in great condition!  The case is a little worn, but then the piano has been moved so many times.  The action is still stiff, meaning that I’m always warmed up.  And it still sounds like a Steinway, even though a technician or two has told me that I couldn’t expect that to last.

Have you shopped for a piano?  What were your criteria?  Please share your thoughts in the comment section below!

“Goal-oriented Practice” is available in both E-book and Print versions.  You’ll see great reviews and wonderful readers’ comments when you click on the link.

Credit cards and PayPal accepted.  You do not need a PayPal account to make a purchase.  And if you prefer, you can mail a check!