Mardy Fish at the 2009 US Open ~ Image via Wikipedia

During the men’s quarterfinal match between Rafael Nadal and Mardy Fish, I was glued to NBCSports.com.

Although I have been following tennis for about a year, I had known very little about the American Mardy Fish.  It was nice to have well-informed, tennis-playing commentators to fill me in.

My take on the match

That said, he plays so well!  That is evidenced by his making the quarterfinals, although I did not watch those matches.  (There may be video replays in my future!)

He won the third set against Nadal.

In the third set, Fish’s entire demeanor changed.  He stood straight, exuded confidence, and ran for the types of balls he had let go before.

He looked like he was there to play tennis for the first time that day.

Whatever it is, Fish lost it after the third set and Nadal, the quintessential example of an elite player who has “nerve,” won the match. 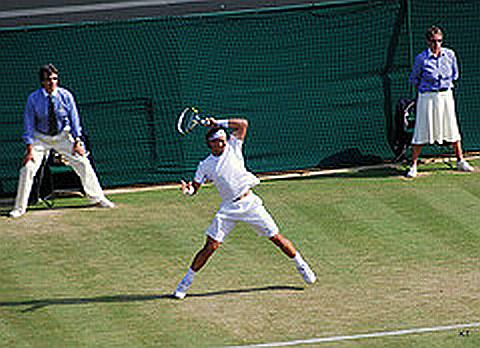 The Winnah! Rafael Nadal in the Wimbledon 2011 Men's Quarterfinals ~ Image via Wikipedia

The commentators talked about “nerve.”  They said that the best players may lose their nerve, concentration, or focus, for brief periods.  But that’s all.  Several of the slightly lower-ranked players also have “it,” but they are inconsistent.  Fish, for example, showed flashes of brilliance but was unable to sustain his best level of playing.

What “nerve” is not

… or doesn’t have to be… there are many definitions.

Few people can be elite tennis players.  But tournament dynamics have many things in common with how the rest of us conduct ourselves every day.

Even when performing music that portrays vulnerability, the performer conveys that with the sound, not his or her posture.

On to the semis!

Murray played outstanding tennis at the beginning, winning the first set.  After that, he missed an easy return and, watching Nadal take advantage and play his best tennis of the tournament, became deflated and never got it back.

Nadal had this to say prior to the Wimbledon semifinal:

“… My foot [injured during Wimbledon] is not fine.  But, you know, we are in quarterfinals of Wimbledon.  Is an emergency, so I had to play….”

He had an injection to “sleep” the foot.  Effective for five hours, it worked.  He felt no pain.

I would not go the same route, but musicians have potentially much longer careers than athletes.  So maybe it’s a little easier to pass something up in the interest of longevity.

Rafa has described what is needed with these words:

Mary Joe Fernandez, while commentating on the semis, said:

Correction:  the commentator was probably Mary Carillo.  The name was not announced, nor was this commentator on screen.

I wonder how many people can verbalize what it takes?

The men’s final, with Nadal vs. Djokovic,  is Sunday.  Can’t wait!

What do you think?  Are you watching Wimbledon?  Where does “nerve” belong in your life?  In your performances?  Please share your thoughts in the comment section below!

Please check out my E-books in the left sidebar!